Climb up the hilltop castle park and enjoy a breathtaking view of the Promenade des Anglais and the entire city. You can see a beautiful waterfall and enjoy a shady park.

The old part of the city is animated by many shops. The Cours Saleya is in the heart of old Nice and hosts the flower market where the flavors and smells of Provence blend.

The Masséna Square is an interesting starting point to visit Nice because you will find there the tourist office. Refreshing fountains and imposing statues make it an important living space that hosts the main events of the city such as Carnival or Christmas market.

The Roman remains of Nice

During Antiquity, the Roman city of Cemenelum was located in the current district of Cimiez north of Nice. From this time, the Roman remains of Cimiez include a well preserved arena and baths. The site also houses the archaeological museum and the Matisse museum.

The museums of Nice

Nice offers fifteen museums that are worth seeing. These include the Museum of Modern Art and Contemporary Art, the Matisse Museum, the Archaeological Museum and the Marc Chagall National Museum. The city offers daily tickets giving access to all museums for a dozen euros.

In the Nice hinterland, you can visit medieval villages hung in the hills. The best known of these villages is Saint-Paul-de-Vence because it was the refuge of the movie stars during the Cannes festival. Among these many typical villages, there is also the village of Gourdon nicknamed the eagle’s nest and the village of Eze. 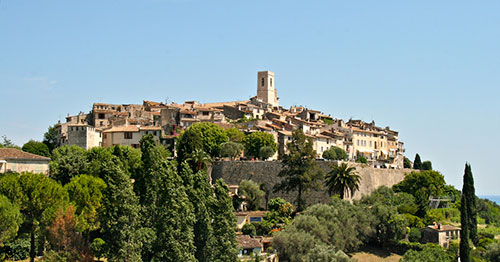 To visit Nice in one day, you can take a Hop-On Hop-Off bus ticket for the day. This tourist bus serves the main attractions of the city and you can take it as many times as you want during the day. The city also has a public transport system, including a tramway.

For transfers from Nice airport or to get to the Nice region, we offer a car service with chauffeur.

Do not hesitate to contact us or to directly reserve your car with driver on the home page of the site or on the booking page.

See you soon in Nice for an unforgettable stay in one of the most beautiful cities in France.